The treatment of multiple myeloma has advanced significantly in the past 16 years with the introduction of proteasome inhibitors and immunomodulatory agents. These advances have led to a standard of care composed largely of immunomodulatory and proteasome inhibitor–based regimens. However, as multiple myeloma has a 5‐year relative survival rate of 52%1 and with the emergence of treatment resistance, there is still a need for additional novel therapies.

The U.S. FDA approval of the monoclonal antibodies daratumumab and elotuzumab in 2015 further expanded available treatment options. Monoclonal antibodies enhance the immune response against cancer cells, either by directly stimulating the activity of immune cells or by targeting specific cell-surface tumor antigens.2 Elotuzumab targets signaling lymphocytic activation molecule F7 and elicits its effect via a dual mechanism of action: direct activation of natural killer cells and antibody‐dependent cellular cytotoxicity,3 with a minimal effect on normal tissues. Conversely, daratumumab binds to CD38 and inhibits the growth of CD38-expressing tumor cells by inducing apoptosis directly and by immune-mediated tumor cell lysis.4 Both monoclonal antibodies are associated with prolonged progression-free survival in clinical trials of patients with relapsed and refractory multiple myeloma.5

Elotuzumab was initially approved in combination with lenalidomide and dexamethasone for the treatment of patients with relapsed or refractory multiple myeloma, based on the results of the ELOQUENT-2 trial.2 It has since been approved in combination with pomalidomide and dexamethasone in patients who have received at least 2 prior therapies, including lenalidomide and a proteasome inhibitor.6 [Editor’s Note: Although it is not in the prescribing information, NCCN has given elotuzumab plus bortezomib and dexamethasone a category 2A designation for previously treated multiple myeloma.7 This designation signifies that “Based upon lower-level evidence, there is NCCN consensus that the intervention is appropriate.”]

Works Well With Others

“Elotuzumab should not be used alone, as it does not have single-agent activity,” said Ravi Vij MD, MBA, Professor of Medicine, Division of Oncology, Section of Bone Marrow Transplant at the Washington University School of Medicine in St. Louis, Siteman Cancer Center at Barnes-Jewish Hospital. However, he explained, that does not mean it has no place in therapy. “It works best when combined with immunomodulating drugs.”

“One setting where I’ve been using elotuzumab is in patients who have biochemical disease progression after initial therapy. In those patients, I usually get a positron-emission tomography scan and bone marrow biopsy. Provided they do not have evidence of active disease, I will usually give a regimen of elotuzumab, lenalidomide, and dexamethasone, because in some patients, this regimen achieves a prolonged period of disease control.” Dr. Vij noted that there are no biomarkers to identify patients who are likely to respond to this triplet regimen, but fortunately, the use of this particular therapy has been associated with little risk to the patient. “Within a period of 4 to 8 weeks, we know if a patient is responding.”

Expanding Use a Possibility?

Dr. Vij believes the indications for use of elotuzumab may be expanded in the future to include more patients with refractory disease who have experienced disease progression after receiving other FDA-approved treatments, including daratumumab and carfilzomib. “Historically we have lacked much data in patients with refractory disease. However, now we have some new data sets that increase our confidence in employing this strategy,” he told JNCCN 360. In an analysis of data from the PREAMBLE trial registry, which looks at real-world use of drugs, researchers evaluated more than 1,000 patients exposed to daratumumab.5 While searching for treatment patterns after daratumumab failure, they found that elotuzumab-based regimens had an equal chance of producing a response compared with other regimens.

Elotuzumab use is likely to expand, especially in settings in which we have not been open to using it in the past.

“These regimens included a combination of previously used drugs in new combinations, usually alkylating agents such as bendamustine or cyclophosphamide, or more aggressive regimens, such as dexamethasone, thalidomide, cisplatin, doxorubicin, cyclophosphamide, etoposide (D[T] PACE) and dexamethasone, cyclophosphamide, etoposide, cisplatin (DCEP). In this population, the duration of response was about 5 months,” he said. Dr. Vij considers this a “decent” duration of response in a highly refractory population. Most of the elotuzumab regimens used in this analysis consisted of combination with lenalidomide and dexamethasone. “It is anticipated that if elotuzumab is combined with pomalidomide, the results could be potentially even better,” said Dr. Vij. [Editor’s Note: The PREAMBLE trial is sponsored by Bristol-Myers Squibb, the manufacturer of elotuzumab.]

Based on the findings from recent clinical trials, Dr. Vij believes that even those who had been skeptical about a role for elotuzumab have had a change of heart and are open to trying it with their patients. “This is increasingly of relevance as daratumumab moves into the front-line setting, and we are looking for options for patients who have previously received daratumumab. Again, there will be no one optimal choice for all patients, but I think in the appropriate patient population, an elotuzumab-based regimen, especially with pomalidomide, would be worth trying. I think that elotuzumab use is likely to expand, especially in settings in which we have not been open to using it in the past.”

One of the things that stands out with elotuzumab-based regimens is tolerability.

Infusion reactions may occur with elotuzumab, typically during the first treatment cycle. For this reason, diphenhydramine, ranitidine, and acetaminophen should be administered before each infusion in addition to dexamethasone. However, the incidence of an infusion reaction is significantly lower than with other agents, including daratumumab. Infusion reactions were reported in 10% of patients in the ELOQUENT-2 trial, with grade 3 reactions occurring in 1% of study participants. The most common symptoms of an infusion reaction related to elotuzumab include fever, chills, and hypertension; bradycardia and hypotension have also been observed during infusions. With a reported discontinuation rate of 1% due to infusion reactions, serious reactions are rare.8 “In most cases, we are able to stop the drug, give extra medication, and resume the drug, with little in the way of recurrence of symptoms,” said Dr. Vij. Infusion was interrupted due to infusion reactions in 5% of patients during the ELOQUENT-2 trial, but typically it resumed in under 30 minutes.8

“One of the things that stands out with elotuzumab-based regimens is tolerability,” Dr. Vij said. For most patients, the side effects of the elotuzumab partner drugs, including immunomodulating drugs and steroids, are most concerning. “There are very few people we would not offer it to,” added Cynthia C. Harrington, NP, of the Massachusetts General Hospital Cancer Center. “It is well tolerated in the elderly population, even in combination with immunomodulating agents.”

Despite its favorable toxicity profile, elotuzumab may not be an ideal option for all patients. “Patients who are having brisk, symptomatic disease progression and need a relatively rapid response may not be the best candidates for treatment with elotuzumab,” Dr. Vij told JNCCN 360. Some patients, especially those with renal insufficiency, may be at risk for hypercalcemia. “We are often looking for response within days in this patient population,” so patients with brisk disease progression “may be better candidates for a carfilzomib-based approach.”

Both elotuzumab and daratumumab can interfere with immunofixation used to monitor M-protein, because the assay may not be able to differentiate between exogenous monoclonal antibodies being used to treat patients and endogenous monoclonal antibodies associated with disease.3,9 Ms. Harrington recommends pointing out this anomaly to patients in advance. “Most of our patients are savvy and like to look up their [laboratory results], so it’s important to teach them that it could fluctuate and may split into 2 bands of protein in their blood work. Otherwise, they may be alarmed.

Some institutions have access to laboratories that are capable of eliminating the monoclonal antibody interference from the M-spike, but this technology is not widely available.” Because the M-spike may be a less reliable indicator of disease response in patients receiving monoclonal antibodies, Ms. Harrington stressed the importance of focusing on the full panel of lab results to give a more accurate picture of how the patient is responding to therapy. “We typically have a baseline assessment of their multiple myeloma labs, including serum protein electrophoresis, immunofixation, and light chains. We also want to monitor their complete blood cell count because these patients can have pancytopenia and are at a higher risk of infection.” She also recommends keeping an eye on creatinine and liver function, because elotuzumab carries the risk of hepatotoxicity.

Teaching and education upfront are essential for patients to reduce anxiety and give them a better sense of what to expect with elotuzumab treatment.

Ms. Harrington emphasized that education is key with any drug regimen. “Teaching and education upfront are essential for patients to reduce anxiety and give them a better sense of what to expect with elotuzumab treatment.” She added that at her institution, the pharmacist in the clinic will sit down with patients to answer questions and review their other medications, and the infusion nurse also provides education and reassurance. “We have a multilevel educational system set up to make our patients feel comfortable and well informed as they go into treatment.”

Coordinating with patients in advance is essential to ensure that they have a supply of oral dexamethasone at home and understand the appropriate timing of the preinfusion dose, said Ms. Harrington. “Dexamethasone should be given within 3 to 24 hours prior to the dose of elotuzumab, and patients are not going to be in clinic 3 hours before starting the infusion.” Additionally, due to the steroids, “we put people on Pneumocystis jiroveci pneumonia prophylaxis, which is usually trimethoprim/sulfamethoxazole at our institution.”

Although zoster prophylaxis is not an official recommendation with elotuzumab, as is the case with daratumumab, Ms. Harrington said that in her practice, “we have noticed the reactivation of shingles for some patients. This was also observed earlier in study results. Most of our patients are already on antivirals for a long time anyway, so we tend to leave them on these agents or restart them to avoid zoster reactivation.”

“We are also pretty liberal with antibiotics and intravenous immunoglobulin to help protect patients from infection as much as possible,” Ms. Harrington told JNCCN 360. Patients treated with elotuzumab may be at a higher risk for upper respiratory infections, which can often progress to pneumonia. “Anything out of the ordinary—temperature of 100.5°F or higher, productive cough, shortness of breath, intense fatigue—we will bring them in to double-check that.”

Secondary malignancies are another concern with elotuzumab therapy. Ms. Harrington reflected on a patient who was treated with elotuzumab for approximately 5 years when he suddenly developed several squamous cell carcinomas. After elotuzumab treatment was discontinued, the lesions quickly resolved. “It was a great teaching point for us to remind patients to check their skin and alert us to anything out of the ordinary,” she noted. 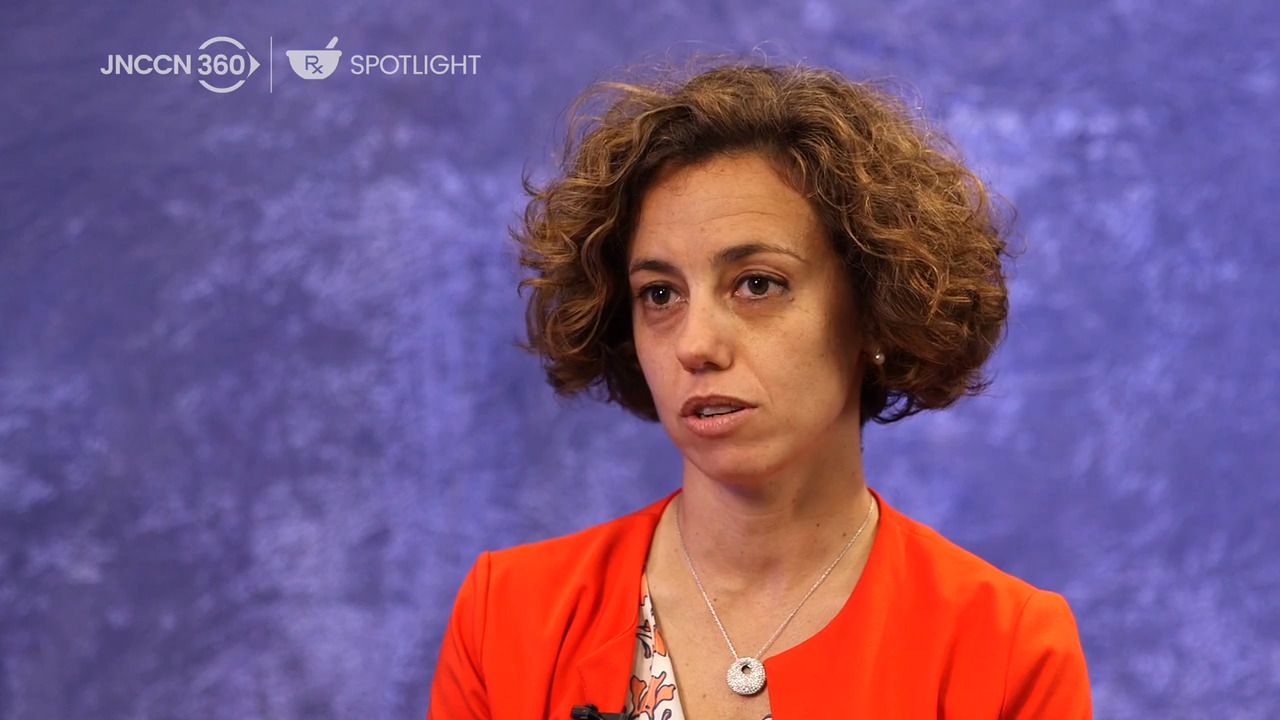 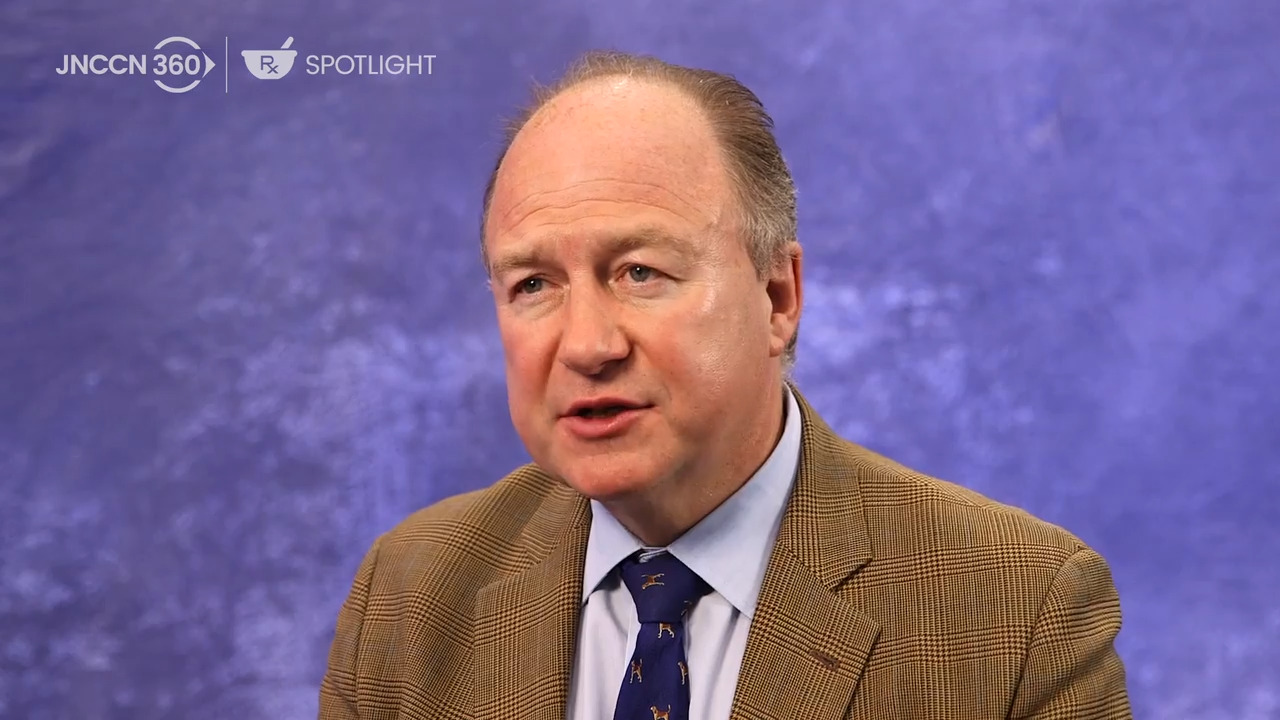