Bevacizumab was the first angiogenesis inhibitor approved for use as cancer therapy. Since this vascular endothelial growth factor (VEGF)-directed monoclonal antibody was first approved by the U.S. Food and Drug Administration (FDA) for use in the treatment of metastatic colorectal cancer in 2004,1 indications for bevacizumab have broadened to include nonsquamous non–small cell lung cancer, recurrent glioblastoma, metastatic renal cell carcinoma, and recurrent or metastatic cervical cancer.

Expanding Use in Ovarian Cancer

Treatment options were expanded to include patients with ovarian cancer in 2014, when bevacizumab was approved by the FDA in the treatment of women with platinum-resistant, recurrent epithelial ovarian cancer, based on the results of the phase III AURELIA trial. Bevacizumab in combination with chemotherapy (weekly paclitaxel, pegylated liposomal doxorubicin, or topotecan) significantly improved progression-free survival compared with chemotherapy alone (6.8 vs. 3.4 months).2 Oral metronomic cyclophosphamide plus bevacizumab is another preferred option (category 2A) listed for platinum-resistant recurrent ovarian cancer in the National Comprehensive Cancer Network® Clinical Practice Guidelines in Oncology (NCCN Guidelines®) for Ovarian Cancer.3,4

In 2016, a second indication for bevacizumab was approved for patients with ovarian cancer based on two key trials, this time in women with platinum-sensitive, recurrent disease. In both the OCEANS study and GOG-0213, there was a significant improvement in progression-free survival (12.4 vs. 8.4 months; 13.8 vs. 10.4 months) with the addition of bevacizumab to chemotherapy.5,6 In this setting, bevacizumab was approved in combination with carboplatin and paclitaxel or in combination with carboplatin and gemcitabine followed by bevacizumab maintenance.7 Although the median overall survival was not significantly improved with bevacizumab in the OCEANS trial, it was improved in the GOG 213 study, from 37.3 months to 42.2 months.5,6

For patients with stage II to IV disease who have undergone surgery, the addition of bevacizumab to upfront chemotherapy with carboplatin and paclitaxel, followed by bevacizumab maintenance monotherapy, is considered a category 2A recommendation in the NCCN Guidelines for Ovarian Cancer. Recent results have reduced enthusiasm for using bevacizumab as part of initial treatment for ovarian cancer. Data from ICON7 and GOG-0218 did not show a statistically significant increase in overall survival in the whole study population, nor did it improve quality of life, and improvements in PFS proved to be transient.3,8,10

“I personally don’t use much bevacizumab front line, but I may consider it for a patient with stage IV disease who doesn’t seem likely to have bowel perforation. I usually reserve bevacizumab for low-volume, platinum-resistant disease,” said Gini Fleming, MD, Medical Oncology Director of Gynecologic Oncology at the University of Chicago Medicine. Shrina Patel, PharmD, a clinical pharmacist at MD Anderson Cancer Center in Houston, told JNCCN 360 that oncologists at her institution also typically refrain from using bevacizumab as a first-line agent. “In the two major trials in the front-line setting, ICON7 and GOG-0218, bevacizumab didn’t add much as far as overall survival benefit and improvement in quality of life. For these reasons, we don’t typically add bevacizumab upfront.”

Advantage for Some Patients

Although neither of these studies found an improvement in overall survival among the entire population, a high-risk subset of women in each trial did gain a significant advantage in overall survival with bevacizumab plus chemotherapy followed by bevacizumab maintenance.8,10,11 “In the GOG-0218 study, a subset of patients with ascites benefited from bevacizumab given upfront. Of course, if we add it up front, then we must time it appropriately around their initial debulking surgery, because bevacizumab can interfere with wound healing,” explained Dr. Patel.

“A trend in the ICON7 trial was also observed in overall survival in patients whose debulking surgery was suboptimal,” continued Dr. Patel. “So, we may consider adding bevacizumab up front if either of these factors is present.”

The final analysis of GOG-0218 also showed a survival benefit for patients with stage IV disease treated with upfront and maintenance bevacizumab.12

However, Dr. Fleming noted some reservations about the survival advantage demonstrated in the high-risk populations. “I’m just not convinced that the survival benefit is meaningful,” she said. In ICON7, “bevacizumab clearly didn’t improve survival for most of the population; in the ‘poor-prognosis group,’ the improvement in restricted mean survival was from 34.5 months to 39.3 months. I think there is probably a survival benefit in a group of patients, but I don’t think it’s very large.”

When adding bevacizumab to another chemotherapy, we are using a different mechanism of action to target the cancer cells.

If a patient fails to respond to a bevacizumab-containing regimen, should bevacizumab be shelved for good? Often, this decision comes down to physician preference, Dr. Patel told JNCCN 360. If the patient was tolerating bevacizumab without adverse effects, oncologists at her institution will continue it down the line with the next chemotherapy agents. “When adding bevacizumab to another chemotherapy, we are using a different mechanism of action to target the cancer cells, similar to the way they practice in gastrointestinal malignancies. We have a couple physicians here [at MD Anderson] who try not to use bevacizumab early precisely for that reason; they like to reserve it for the platinum-sensitive or recurrent setting.” Ongoing randomized trials are testing the concept of continuing bevacizumab after failure of a bevacizumab-containing regimen, including JGOG3023 and MITO16-MANGO2b.13,14

The treatment landscape in ovarian cancer is continually changing. The results of the first randomized trial to evaluate a chemotherapy-free combination of two established agents approved for use in the treatment of recurrent ovarian cancer, the AVANOVA trial, were presented at the 2019 American Society for Clinical Oncology (ASCO) Annual Meeting.15 Preliminary results from this phase II trial demonstrated that the combination of the PARP inhibitor niraparib and bevacizumab more than doubled progression-free survival compared with single-agent niraparib in patients with platinum-sensitive recurrent disease. The 6.4-month improvement in median progression-free survival with the combination represented a 65% reduction in the hazard for disease progression or death (P < .001). This benefit was seen in patients with a platinum-free interval of 6 to 12 months and more than 12 months, patients with or without homologous recombination deficiency, as well as those with or without BRCA mutations.15

Front-line treatment of ovarian cancer is a shifting landscape right now, with immunotherapy, bevacizumab, other antiangiogenics, and PARP inhibitors all vying for front-line slots.

“The combination of an angiogenesis inhibitor plus a PARP inhibitor does not have overlapping toxicity, so in that sense it seems promising,” said Dr. Fleming. “Front-line treatment of ovarian cancer is a shifting landscape right now, with immunotherapy, bevacizumab, other antiangiogenics, and PARP inhibitors all vying for front-line slots. I expect that front-line therapy is going to look very different in just a few years.”

“Bevacizumab is usually well tolerated, but it does carry a risk of rare and severe side effects. Many adverse events can be prevented simply by selecting patients carefully,” Dr. Fleming told JNCCN 360. To ensure consistency of information provided across drugs inhibiting the VEGF pathway, the FDA recently removed a boxed warning for bevacizumab regarding the risk of gastrointestinal perforations, surgery/wound-healing complications, and hemorrhage.1,16 However, these adverse events are still a concern.

“There is a risk for gastrointestinal perforation or fistula with bevacizumab,” explained Dr. Patel. “Therefore, we look for rectosigmoid involvement by a pelvic exam or bowel involvement by a CT scan.” Dr. Fleming emphasized that perforation can occur long after a patient begins therapy. “I had a patient who died of a perforated gastric ulcer after being on maintenance therapy for an extended period. Clinicians should be alert for less common complications,” she advised.

Hypertension is another common concern when initiating treatment with bevacizumab. Both Drs. Fleming and Patel told JNCCN 360 that they will not start bevacizumab in a patient with uncontrolled hypertension. They also stressed the importance of enlisting the help of colleagues who are adept at treating high blood pressure.

“I will add antihypertensives myself, but if it’s a complicated case, I work with a hypertension specialist. I often see bevacizumab discontinued due to hypertension, but if you are proactive and seek help if the patient is on more antihypertensives than you think you can manage, treatment discontinuation is usually not necessary,” explained Dr. Fleming. She also noted that she will not treat a patient if her blood pressure is higher than 140/90 mm Hg.

At MD Anderson, “we make sure that patients with baseline hypertension are being seen by internal medicine colleagues and are being managed appropriately,” said Dr. Patel. “If the patient had no previous hypertension, the internal medicine clinic will usually start her on an angiotensin-converting enzyme (ACE) inhibitor or an angiotensin receptor blocker (ARB) to help counteract proteinuria, taking into account comorbidities and choosing the most appropriate agent. We don’t have specific ‘hold’ parameters, but I would say that if the patient’s systolic blood pressure is higher than 160 mm Hg, we will generally hold that dose.”

Proteinuria, which appears to be dose-dependent and likely involves multiple pathways induced by VEGF inhibition,17 is another adverse event that can disrupt treatment with bevacizumab. “There is no clear consensus as to how to follow or monitor proteinuria, but the goal is to prevent nephrotic syndrome,” explained Dr. Patel. She recommends checking urine protein at baseline and every 2 to 3 cycles. “If urine protein is elevated, we will do a 24-hour urine collection and will hold bevacizumab if urinary protein is more than 2 g/24 hours until the urine protein improves.”

Bevacizumab is well known to interfere with wound healing, making even minor surgical procedures risky. “We usually try to leave 4 to 6 weeks between surgery and bevacizumab treatment on either end, but if an emergent operation is necessary, it is not always possible,” Dr. Fleming said. She also advises using caution with Port-a-Caths: “The rate of dehiscence from Port-a-Cath placement in patients on bevacizumab is significantly higher.” Similarly, for planned outpatient procedures such as hip/knee surgery or dental work, Dr. Patel said the protocol at MD Anderson is to hold bevacizumab for 4 weeks before and 4 weeks afterward. “That said, we make sure the wound has healed appropriately before restarting bevacizumab.”

Both Drs. Fleming and Patel urge patients receiving bevacizumab to report any signs of high blood pressure, such as headache, and to have their blood pressure checked routinely with an internal medicine specialist. Patients are also advised to be aware of the risk of bleeding.

“The most common type of hemorrhage seen in patients receiving bevacizumab is a grade 1 nosebleed, which is often transient. We typically recommend saline nasal sprays or humidifiers in those cases,” said Dr. Patel. “Sometimes, patients have nosebleeds severe enough to require cauterization,” added Dr. Fleming. “We also ask patients to report myalgia as well as joint aches and pains. These complaints are common for patients on prolonged maintenance, and for some, they are uncomfortable enough to stop therapy.” However, Dr. Fleming reassured, “most of the common issues associated with bevacizumab are manageable.” 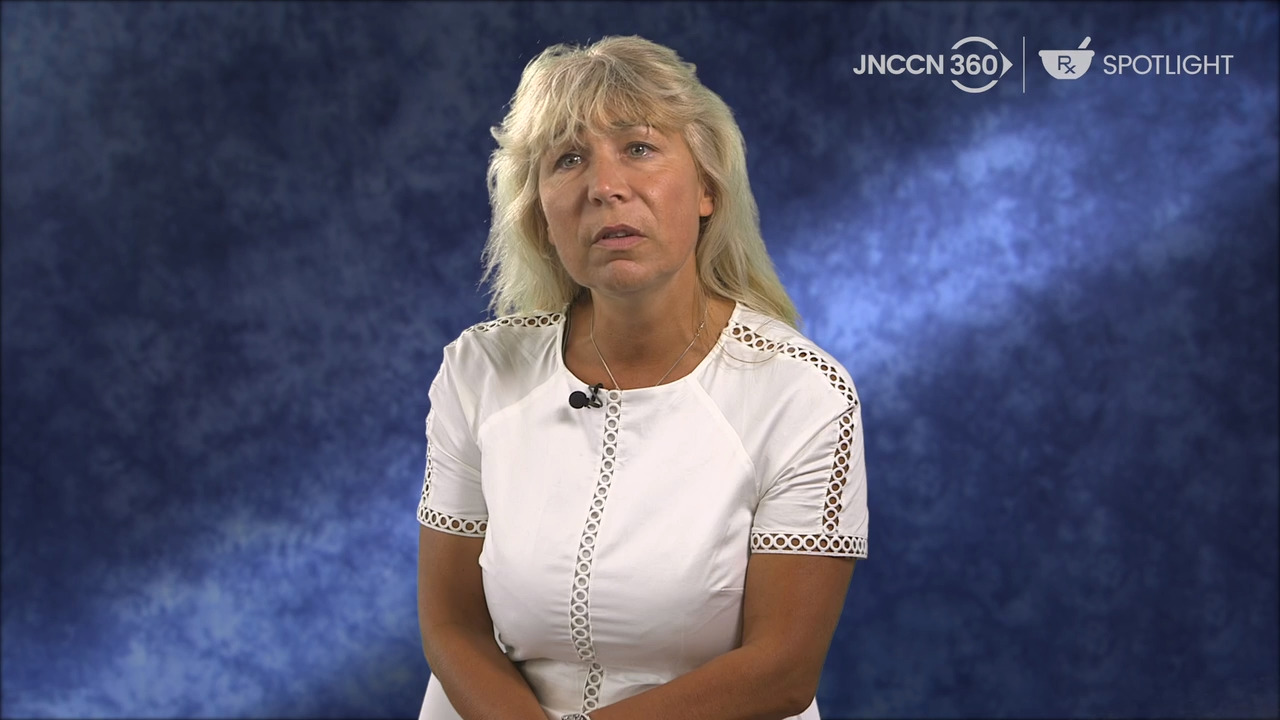 [Editor’s Note: The NCCN Guidelines include an additional dosing regimen.]

No dose reductions for bevacizumab are recommended.